The sign of Pisces in Vedic Astrology is much like what you’ll learn in western astrology, but there are some interesting differences too. 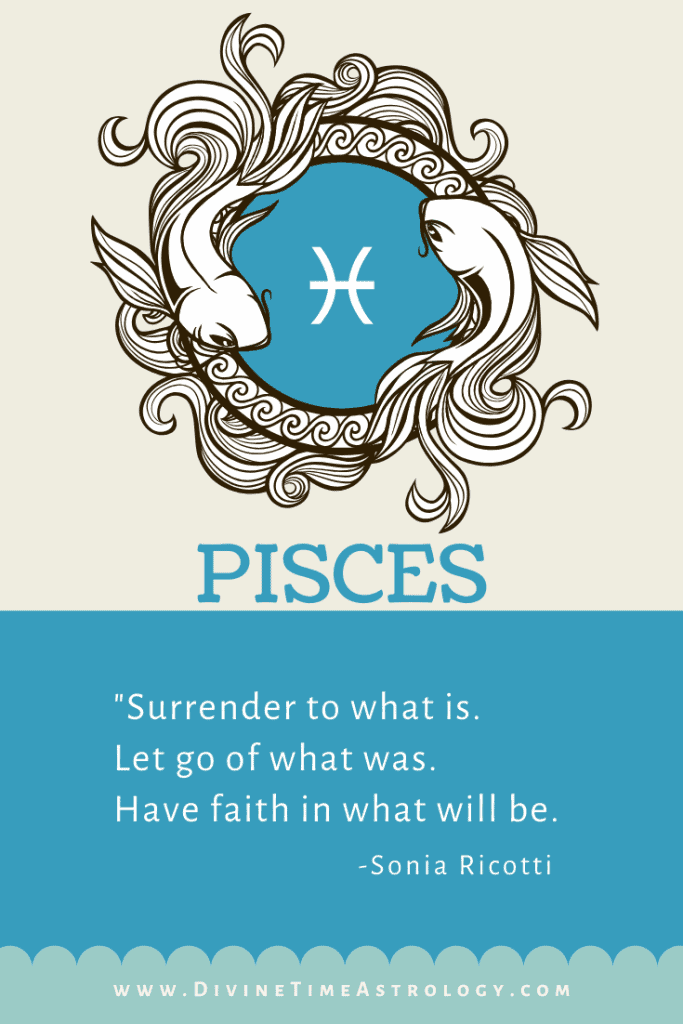 The Gift of PISCES

If you have planets in the sign of Pisces, especially if you have Venus in Pisces, the gift you give to the world is your ability to love unconditionally, your innate kindness, and your eye for beauty.

Pisces is the last sign of the zodiac and symbolizes letting go. And you don’t tend to cling to your ideas about the way things, and people, should and shouldn’t be.

You are non-judgmental and can put yourself in the other person’s shoes to feel what they feel.

When I was thinking about the sign of Pisces after making the video on Pisces below with my friend Channing Ayers, this book came to mind. This book, The Surrender Experiment: My Journey Into Life’s Perfection, chronicles one man’s experiment with saying yes to whatever life brought him. By doing this, his life took the most unexpected and wonderful turns.

Written by Micheal Singer, the same guy who wrote The Untethered Soul, his life and philosophy is an excellent example of the ideal Pisces way of being.

Channing Ayers of channingayersastrology.com and I continue our evergreen series on the Signs in the VIDEO below. In this two-part series, we discuss the sign of PISCES in depth. Some of what we discussed in the video is not in this post, and visa versa. Such as the Guna and the Dosha not covered here. Understanding PISCES helps you have a more balanced view and a deep appreciation of the PISCES people in your life. 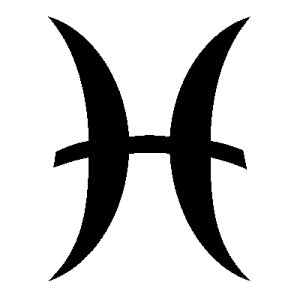 The symbol for PISCES is the two fishes swimming in opposite directions while connected. Here is the description of PISCES from Brihat Parashara Hora Shastra:

“Two fish sticking to each other tail with face, the fish rasi (sign) is day-strong, watery, richly endowed with Sattva, self-abiding, moving in water, footless, medium-bodied, standing in the north, rising both ways and ruled by Jupiter.”  Brihat Parashara

The feet are as far from the organ of thinking, the brain, as possible. Thus the feet represent the loss of understanding. Pisces can be very lost and confused and not connected to the higher consciousness. However, the body of the zodiac is a circle, and thus Pisces is the closest to Aries.

Pisces, therefore, can overcome the sense of “I” that is lost and confused, and understand things from a much higher perspective. The perspective of a liberated consciousness.

Only Pisces can tell, the understanding of Pisces is the real thing. Thus we have the idea of “landing on one’s feet,” conveying the idea of making a mistake, but it all turns out okay anyway.

As long as we are concerned about how we feel and expect to feel happy and right due to anything that we are doing, we will not be aware of the indwelling Self. We will only be mindful of feeling good or bad, so Pisces needs to renounce the fruits of how one feels about themselves – this is the third stage of Karma Yoga. 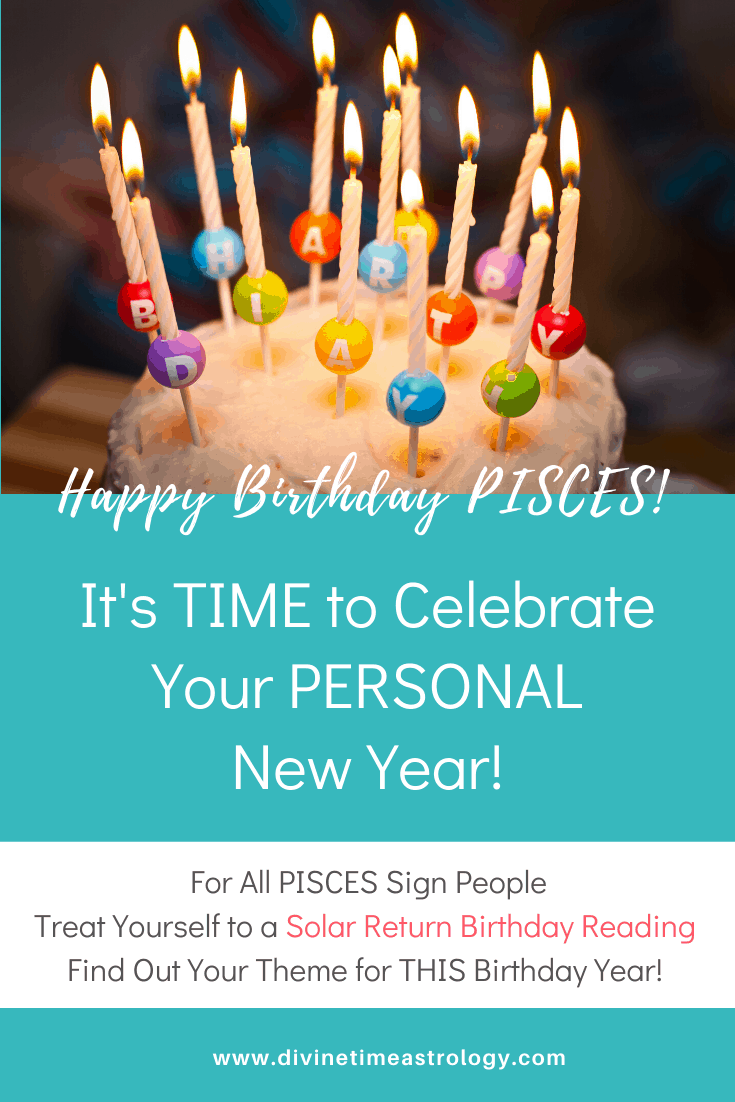 Schedule your Yearly Birthday Consultation (Varshaphala) and find out what the THEME is for your birthday year. What the training periods are and the pleasurable and carefree times of the year.

FIND OUT if it is one of the most significant years of your life. If you mention this article, you will receive a Muhurta Report for something important you want to do this birthday year as a Bonus!

If you get only one astrology reading a year, the Solar Return Birthday (Varshaphala) is the one to get!

It’s also a thoughtful Birthday Gift for the PISCES in your life (including yourself!).

Feminine signs are gentle because they are concerned more with enjoying life and ‘being’ rather than in getting things done. They are receptive and responsive, and their actions depend on how they feel. The better the feminine signs feel, the better they do.

Female-energy Pisces does good, behaves well, and finds itself in good circumstances when it feels connected and loved.

Difficult planetary combinations in Pisces indicate pain and misery that is held within and hurts itself rather than hurting others. Gentle Pisces is full of empathy and reacts with compassion.

PISCES is of the Water Element

The water element is feeling centered, and yielding is their strength. Emotions are the way the water signs perceive truth, meaning through a particular sense or impression.

In horary astrology, if one is asking where an object is, and the object’s planet is in a water sign, that indicates that the object is somewhere “comfortable.” Comfortable means that the object could be nestled in with a pile of clothes, blankets, pillows, etc., or it is near water or something representing water.

The Caste of the Sign of PISCES is Brahmin

The 4th, 8th, and 12th houses are the Moksha (liberation) houses, which correlate to the goal of Brahmins and the Water Rasis.

Day strong signs are vigorous during the day and get energized by bringing things into concrete realization. Front-rising signs rise over the eastern horizon with their fronts first. Signs that are front-rising have an easy time bringing their tasks to practical manifestation.

Because Pisces is the last sign of the zodiac, it represents completion and conclusions. The fishes going in opposite directions means that Pisces will bring things into realization that it needs to, but is incapable of bringing things into concrete manifestation that has karmically completed.

Zodiac signs are either two-footed, four-footed, many footed or without feet, and moving in the water. The footless sign, Pisces, is only able in water, meaning that its strength lies in its ability to surrender and go within.

The Color of PISCES is Clear or Black

The ‘color’ of Pisces is clear or black (all the colors mixed together). Channing gives a gemstone recommendation for Pisces Sun people in the video below.

VIDEO on The Sign of Pisces in Vedic Astrology: