Horary Example: “Will he call again, did I talk too much?” 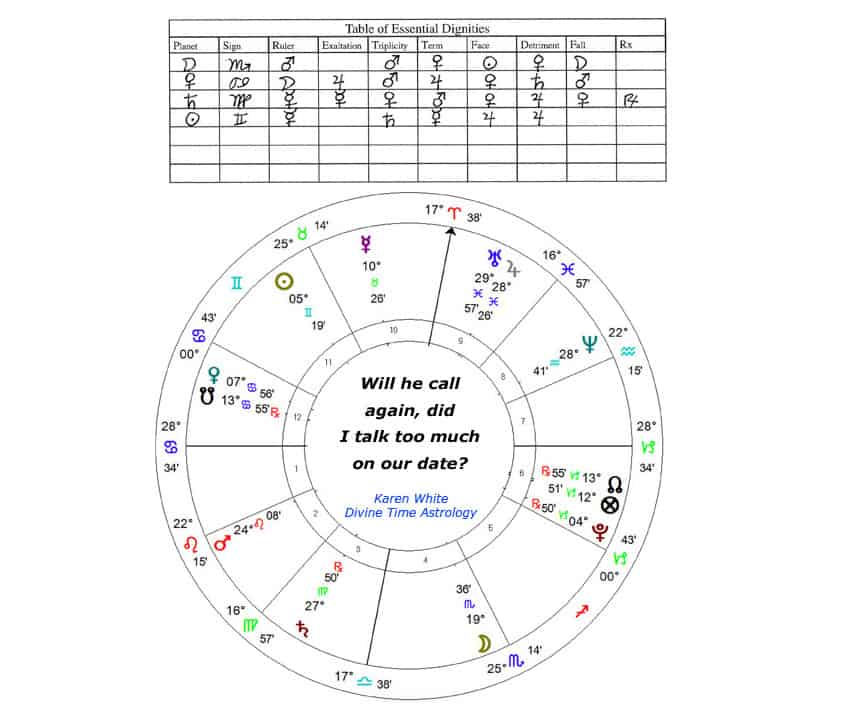 Here is an example of a Horary relationship chart. The question is, “Will he call again? Did I talk too much on our date?”

This horary question came from a client who had just re-entered the dating world after being married for several years and is now a single mother. She wanted to know the answer to this so she could not waste time and move on quickly, one way or the other.

The person asking the question in any Horary chart, called the Querent, is always represented by the Ascendant ruler. Because it’s a relationship question between a man and woman, the woman gets Venus as a co-significator.

In this horary example chart, the 7th house ruler represents the man she is asking about. He also gets the Sun as a co-significator to represent him as “man.” It’s only in romantic relationship horary charts that we use Venus and the Sun in this way.

The Heart of Horary is the Table of Dignities

The graph that you see drawn above the chart wheel is the Table of Dignities. This table reveals what each person is thinking and feeling based on the sign the planets are in. Each planet operates better or worse depending on the sign it occupies.

This dignity of the planets in this example horary chart is read from left to right. Planet, Sign, Ruler, Exaltation, Triplicity, Term, Face, Detriment, Fall, and Rx (retrograde) reveal how the people involved feel about each other:

Context is Everything in Horary

The art of Horary is how you apply the dignities of the planets in the context of the question. If you want to know more about how this works, you can read John Frawley’s book, The Horary Textbook, Revised.

What the Querent Thinks and Feels About the Quesited

The Moon is in the sign of Scorpio, the sign of its Fall, which is just how it sounds. It’s not a good sign for the Moon to be in, which in this case, shows her worry that she somehow messed up the date by talking too much. Scorpio is a water sign, and all water signs are mute, so we can see right away that she did not talk too much.

Venus represents the Querent as a physical being, or “woman,” the part of her that wants a mate. Venus is in Detriment in the sign of Scorpio, so we see that she worries she isn’t attractive enough.

Note that in the row of the Moon (the Querent’s head) in the Table of Dignities of the example horary chart above, the Sun (him as “man”) falls into the Indifferent box (Face). Face means she is not attracted to him personally. She wants some male attention and fun, something that she does not get enough of as a single working mom.

Next, we look at Venus, the planet representing her as “Woman,” and it’s in the sign of Cancer. Meaning as a woman, she is subject to what her head thinks. She exalts Jupiter (Jupiter is exalted in the sign of Cancer). Jupiter rules the quested’s 3rd house of communication. She hopes he will call her to make her feel better.

What He Thinks and Feels About Her

Now, let’s look at the quested’s (the man) thoughts and feelings about the Querent (the woman). The sign on the Descendant is Capricorn, so Saturn is the ruler and the significator of the man.

Then when we look at the Sun (the Quested as a man). We see it is in the sign of Gemini, the other sign ruled by Mercury! Whoever this person is, he truly loves them. There is no need to look further to answer the Querent’s question, but we will just for fun.

Will He Call Again?

When looking for a future event (a phone call could be a future event in the context of this question), the chart is like a crime; there needs to be a motive and opportunity. First, if the quested is interested or attracted to the Querent, that is his motive. Contact between any planets representing the two of them in the future shows opportunity.

But, no, the quested is clearly longing for Mercury. The Querent’s planets don’t even show up in the dignities of his planets. Therefore, the Querent is not on his mind at all. He is not motivated to make anything happen between them in the future.

She has no feelings for him either and is just looking to have some fun, so she is not motivated either. Therefore, she was only mildly disappointed to hear there was no future in this relationship, not because she talked too much. She was able to drop it immediately from her mind.

He has NOT called her, and it’s been years since she asked this question.

Get a Horary Consultation